The North Wales office team ‘Give Summit Back’

An intrepid team of adventurers from our North Wales Office climbed Snowdon on Saturday 2 June to raise money for a very worthy cause.

As a national company, Environmental Essentials and its employees often get involved in charitable events across England, Scotland and Wales.

Most recently, a team from our North Wales Office in Abergele climbed Snowdon in order to raise funds for St Kentigern Hospice and Palliative Care Centre, St Asaph. 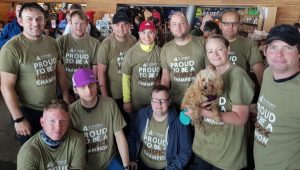 The team wanted to give something back by donating to a charity close to home – one they have proudly supported as individuals over a number of years. The centre has been providing care and support for patients and their families since 1995.

An early start meant the group were among the first that day to reach Snowdon’s summit after the 723 metre ascent via the Pyg track.

Collectively, the aim was to raise £500, but at the time of writing total donations had reached an amazing £954. There is still time to donate on Dave Poulter’s JustGiving page to push our dedicated team to the £1000 mark.

Although the climb was challenging for most, the group are already planning to undertake the Three Peaks Challenge next year, albeit with the caveat that it will be over three days rather than the standard 24 hours. Staff are also gearing up for a local beach clean later in the year.